I’ve liked – that isn’t strong enough, since as a young teenager, I used to celebrate his birthday – Eric Burdon for such a long time that it seems a little strange that I haven’t seen him since 1968, when the five original Animals reunited for two sets at Newcastle City Hall, for charity. I was 16, and not quick enough off the mark to get a ticket for the later performance; but I did see the first one (the second was said to have been better, by a friend who bought a ticket for each). So going to see Eric Burdon, now 72, at Colne – his only UK date in three or more years, as far as I can work it out – was an overdue kick. (He headlined on the Sunday night, August 24th.)

This was the first gig for Burdon since the end of nearly a decade in court came to an end in 2013, with a judge overturning a 2008 decision that the original drummer, John Steel, had the rights to the name ‘The Animals’, something he claimed in 2004. You can read the judgement here. Fittingly, he appeared as ‘Eric Burdon and the Animals’, although any hopes that the one original Animal with whom he is still speaking, guitarist Hilton Valentine, would be there, were soon put to one side.

The venue – ‘The International Stage’ – at Colne turned out to be a pleasantly down-at-heel municipal theatre, capable of taking about 500-600 people (I would say there were fewer), including a balcony, although I opted for a place by the stage, until the pressure on my left eardrum was so severe that I moved away.

The last time I saw The Animals – or Eric, at any rate, since I’ve seen Steel’s outfit, ‘Animals and Friends’ a couple of times – they had grown apart in every way. Steel and Alan Price had left the band (I should say ‘group’, shouldn’t I?) before the end, and been replaced by two musicians, Barry Jenkins and Dave Rowberry, who I thought were actually better. Their last album, Animalism (sic, not to be confused with Animalisms) had been released with no fanfare in the US only – in fact it has still had no official release in the US or UK on CD, and it has never had a release on vinyl in the UK, a weird fact about the best R&B band of the sixties. In 1968, Chas Chandler (died in 1996), the bassist, and Valentine were in denim. Steel was in a smart-casual button-down shirt and tie. Alan Price was in a dinner jacket. And Eric Burdon had long hair, and was wearing a striped poncho. He’d also forgotten the words to ‘Don’t Let Me Be Misunderstood’.

It has always been a mystery to me how Price was ever allowed to appear onstage with the others, since all the royalties on ‘House of the Rising Sun’ accrue to him. All four of the others say that he wasn’t keen on the song, while Price claims he did the arrangement. It’s suggested that the manager, a truly shady character called Mike Jeffery, and who died in a 1973 plane collision over France, in some way colluded with Price to place his name on the ‘traditional’ song as the arranger. No-one is ever going to know the truth, although Price left the band the moment his first royalty cheque arrived, and on the eve of a Swedish tour, without telling the others. They had to rope in a teenager called Mickey Gallagher for the tour – Gallagher subsequently ended up in The Blockheads, and currently plays for ‘Animals and Friends’ with Steel. But they reunited twice more, once for a tour in the early 1980s, which must have messed with Burdon’s head in no small way, since the song is identified so much with him (I have lost track of the number of times he has re-recorded it, and so has he, I would guess). There is a Japanese CD called ‘Last Concert’ in which you can hear how fed up Burdon is with the venture.

Burdon was asked in a local Colne interview if he had any advice for his teenage self. He starts ‘Never trust your bandmates.’ You can see why. 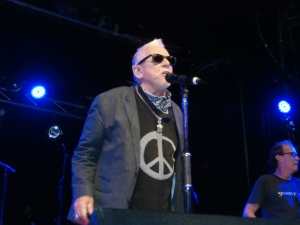 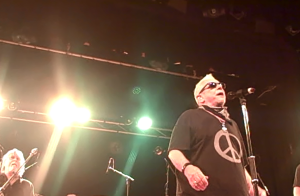 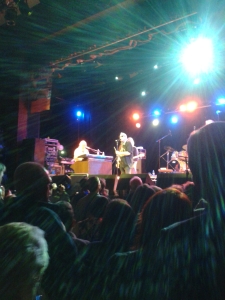 Burdon’s band at present must be one of the strongest – he says it is the strongest, but I guess he would – ever to back him. Terry Wilson on bass, Wally Ingram on percussion, Billy Watts on guitar, Tony Braunagel on drums (the last three have all won or nearly won awards) and the veteran Red Young on keyboards. I am going to except Ingram from what follows – he was terrific. But the band was accurate and passionless. It was an average performance, and perhaps the result of the unconscionable time they took setting up – Burdon apologised for them, and said that he would sell any one of them into white slavery if we emailed a name in. He did the right thing. The audience had become restive enough to slow-stamp-their-feet and to sing ‘We Gotta Get Out Of This Place’ while the band members tweaked everything. ‘You want it to sound good, right?’ tried Braunagel. The audience wasn’t impressed. Perhaps some of them, like me, had to catch the last train to Preston at 2330.

Is there any good news? Yes. The band may have played without fire (it is bizarrely the case that Mickey Gallagher would have been far, far better), but Eric, all 5ft 6 of him, was in ridiculously good vocal shape. Surprisingly (since he has made three brilliant CDs in the last decade, the most recent, ‘Til Your River Runs Dry, being the best), the balance of the show was a crowd-pleasing hits package, with just three, maybe four from the new CD, and only two (When I Was Young and the curiosity Spill The Wine) from the later sixties. We had Don’t Bring Me Down, Inside Looking Out, Don’t Let Me Be Misunderstood, It’s My Life, We’ve Gotta Get Out Of This Place, and, inevitably, this being its fiftieth anniversary, House of the Rising Sun. Nothing else came from any time else, unless you count ‘Shake’, which is on that ‘missing’ Animalism album, but had been in the Animals’ repertoire for much longer, and which turned up in an encore that combined Boom Boom, Shake and Around and Around. The surprise, and for me the oustanding number, was I Believe To My Soul, the Ray Charles number that The Animals did so brilliantly on their second album. That was the icing on the cake.

Burdon is a shouter. He doesn’t train or rehearse his voice. He just lets it rip. His idol as a young man was John Lee Hooker, who lived to be 83. (Hooker wrote Boom Boom.) With a bit of luck, Burdon may go further – I hope so. You have to respect a singer who has sustained his enthusiasm for singing songs he first tried out half a century ago.

This entry was posted on Sunday, August 31st, 2014 at 11:21 am and is filed under Uncategorized. You can follow any responses to this entry through the RSS 2.0 feed. You can leave a response, or trackback from your own site.