It was, as I suggested, pretty easy to find more on the story behind the Piercebridge memorial. Given that the four girls drowned on Sunday, and late on Sunday too, the reporter from Darlington’s Northern Echo was pretty swiftly on the scene. The first account is in the newspaper the very next day – before, in fact, all the bodies had been recovered:

The reporter does pretty well, all things considered. He gets the surname ‘Ord’ wrong (he has it as ‘Auld’); he doesn’t know which girl has not yet been found; and he doesn’t know Ethel’s first name. He does get the nicknames of the Ord sisters: Hannah is Hannah, but Genevieve is ‘Vevie’, and Winifred is ‘Winnie’. Nor are the details lurid, but they are of course sad, and a little sentimental – probably the two details he picks up on would now be treated with the same eye for detail, but with a lot less respect. The four girls had been collecting flowers: gathering primroses. Four bunches were found on the bank. They’d taken off their boots and stockings, and – although, as the reporter says, this is surmise – decided to test the water for a paddle. Did one slip, and the others try to rescue her? he asks. He also makes an illogical remark (well, I find it illogical): that they had not spent long on the bank, because, close to where the shoes and stockings were found, the name of one of the girls was found ‘written in the sand’. (This factoid is never repeated.) Two of the girls have been found in shallow water, but 600 yards from the shoes and stockings, in the Darlington direction; the other is 150 yards further on.

It was finding the shoes and stockings that started the alarm, according to the reporter, although this story is to change. What subsequently turns out to be the true story is that a Colonel J.G.Williamson – not Wilson, as first reported – of Cliffe Hall, has been out for a late Sunday afternoon walk with a friend and two of his sons, when one of them, Maurice, has spotted a body. He and his brother have pulled it out, only to discover a second. And at this stage, the alarm is raised, the third body is found, and the search starts for the fourth (it is still going on late on Sunday evening, before being abandoned). In the meantime, Ethel’s father, who has been over to visit the Ords with his daughter, and has left her with them, has blithely gone homewards in a train – from Piercebridge Station, leaving at 8.30. This doesn’t fit with the suggestion that the alarm has been raised. He has been stopped before reaching home – either Whitby or Hartlepool, it never says, and I’m not clear – by a telegraph sent to Bank Top station. You have to say that this is all amazingly efficient. And that the fact that you could hop on a train at Piercebridge seems somehow admirable. I suppose a mobile phone call would have reached him more quickly, which would have been awful (he was informed of the drowning by a railway official, not by a random call). Always odd to contrast the technologies.

The bodies have been taken to a local farm (Low Fields Farm, the property of a Mr. Dickinson). The search for the missing fourth girl is resumed at first light on Monday, by which time, they know they’re looking for Hannah, the eldest. She isn’t found until three o’clock, ‘in a deep pool  … close to a large rock’. By deep, about ten to twelve feet is meant. Grappling irons have been used in the search, but they don’t seem to have been used in the discovery. By the time Tuesday’s Northern Echo has reported this, the inquest is already fixed for Wednesday, at The Crown Inn, Piercebridge.

Not surprisingly, Mr. and Mrs. Ord – particularly the former, who was in poor health, and who had only a year or two to live – were horribly distressed. ”The father and mother seem[ed] almost demented.’ They were spared having to identify the bodies, which were laid out upstairs, above the inquest – for viewing by the jury. Their bodies were unmarked, according to Annie Thoroughgood, who had laid them out. A young girl called Annie Graham says that she saw them at four o’clock, near Cliffe Hall, on the Durham side of the river. This in itself is odd, since the original reporter clearly says the boots and stockings were on the Yorkshire side. He may have been wrong, as this is never challenged. There is some speculation that they have walked along a stone shelf, when one has fallen into deep water; there is some speculation that they were thinking of crossing the river (the river incidentally had no footpath, something perhaps we take for granted).  As the coroner remarks, the only thing they can say is that ‘these bodies have been found drowned, but … there is no evidence how it occurred’. The foreman assents.

Two odd things turn up at the inquest – one is that Ethel Stokell has had 2s 8d (quite a lot for a 14-year-old!) on her, a silver ring, and a watch that had not stopped. The other is that only one pair of boots has actually been found, one additional boot, and five stockings. But to look into that mystery, relatives would need to be called, and the Coroner doesn’t wish to involve them.

After this, the Northern Echo – preoccupied not only with the diamond jubilee of Queen Victoria, but also with a pit accident at Kelloe, and plenty of other incidents (the death of a young girl falling off a trap, as in pony and trap), moves on. The funeral is not mentioned. However, about a fortnight later, the members of the Victory  Harmonic Social Club organise ‘a smoking concert’ – the Mayor in attendance – in Darlington, proceeds to the parents of the girls. (Actually, the parents were quite well off. Stokell owned houses in Hartlepool, and Ord had a reputation as a decorator and photographer, having originally been a hatter and mercer in Bishop Auckland.) It would be interesting to find photographs of the four. And also to find out what on earth a ‘smoking concert’ was (actually, this last bit proved to be easy. It was a musical concert only attended by men: rather odd, in the circumstances. The term is apparently still in use in obscure men-only circles).

The Ord Sisters and Ethel Stokell, May 2nd 1897

For no good reason (as ever) Chris and I went to Piercebridge last Sunday. It was a bit chilly. It’s just on the north side of the Tees, about five or six miles west of Darlington. In its cemetery was a most unusual memorial stone: 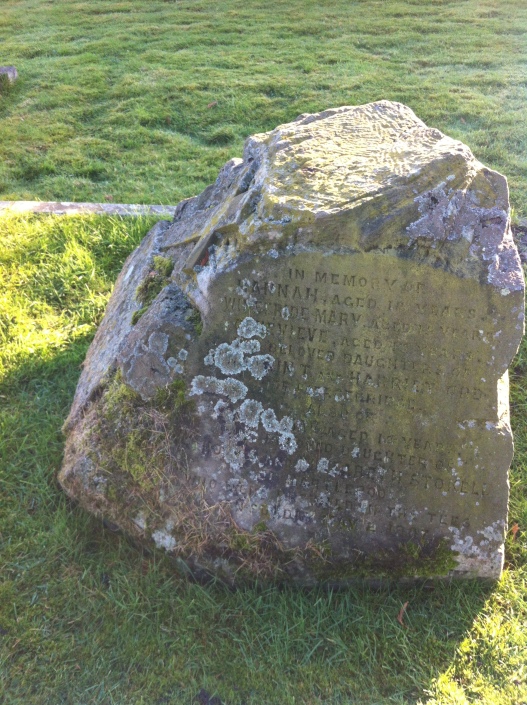 And here’s the other side:

A bit of trawling through ancestry.com and FreeBMD makes clear that this reads

(WINIFRED seems tohave been spelled WINIFREDE)The Stokells were living in Whitby in 1891; they had two sons; he was a painter and brick manufacturer. The younger son had died two years earlier (the elder survived till 1957). Ord was a photographer from Bishop Auckland; he had one elder and one younger daughter, and a younger son in 1891 (when they were living in Piercebridge). He died in 1899, aged 52. In 1901, Harriett Ord is still in Piercebridge, and is a poultry farmer. Her younger daughter and son are still with her. In 1911, she is still in Piercebridge, ‘of private means’. She is listed as having lost four of seven children.

It is very odd that a tragedy like this has not slipped on to the internet. Ord – was his early death cause and effect? – was a photographer at a time when it is almost inconceivable that there will have been no photos taken of the girls. And the Northern Echo must have reported it (an inquest seems likely). So, to honour these poor lasses, I’ll keep at this one.

Sorry for my 18 month-plus hiatus. I’ll answer the queries posted as soon as I can. I’m back …